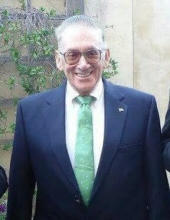 Albert J. Harbuta, 85, of Charleston and husband of Mary Angela Harbuta, passed away Friday, November 18, 2016. Albert Harbuta was born on November 24, 1930 in Lacawanna, NY. He was a veteran of the US Navy, serving in the Korean War on the USS Anderson. He was a retired contract negotiator for Southern Division Naval Facilities Engineering Command. Al was a life member of the James Island Yacht Club. He was a long time member of Nativity Catholic Church. In addition to his wife of 60 years, survivors include his daughters, Ruth Madden (Michael) of Mechanicsburg, PA and Mary Ann Evans (Terry Merritt) of James Island; grandchildren, Catherine Spinner (James) of Mechanicsburg, PA, Thomas Madden, Patrick Madden and Matthew Evans, all of Charleston. A Mass of Christian Burial will be held at 11 AM on Wednesday, November 23, 2016 at Nativity Catholic Church on James Island. The family will receive friends on Tuesday, November 22, 2016 from 6-8 PM at McAlister-Smith Funeral Home, James Island Chapel. Memorial donations may be made to www.fisherhousecharleston.org or they may be mailed to PO Box 1678, Charleston, SC 29402-1678. Expressions of sympathy may be viewed or submitted at www.McAlister-Smith.com Arrangements entrusted McALISTER-SMITH FUNERAL HOME, JAMES ISLAND CHAPEL, 347 Folly Road, Charleston, SC 29412, Phone: 843-614-8494.
To order memorial trees or send flowers to the family in memory of Albert J. 'Al' Harbuta, please visit our flower store.