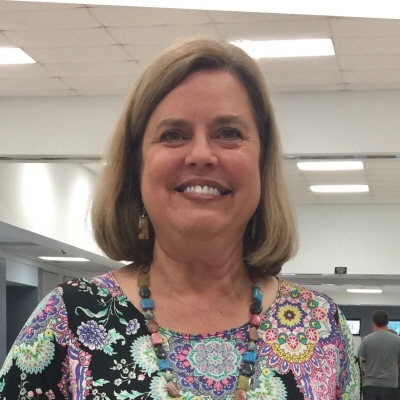 After a year-long illness relating to cancer, Angela Wyndham Powers (60) joined the communion of saints on Saturday, June 12. We will miss her immeasurably, but take comfort and give thanks that she is fully healed in Heaven.

Angela is survived by a family that loved her tremendously and is thankful to God for the years of joy that they shared. She was adored and admired by husband Davis, and was a wonderful mother to their son, Layton. Layton, wife Gracie and their children, Emily, Joseph, Ellyana, Elijah, and William flooded her heart with love.

She is survived also by her loving parents, Ted and Lee Wyndham, and three sisters and their families: Wyndi (John) Green (Spencer, Cassidy, Breland); Brantlee (Michael) Green (Parker, Hayden); and Merideth (David) Strawhorn (Bailey, Elliot, Wyndham). She adored her aunt, Carolyn Candler (Steedley), with whom she shared a lifelong bond of love and affection. She was also beloved by Davis's sister Mary (Thomas) Brunson (Tripp, Becca) and brother William (Stephanie) Powers, who count themselves privileged to call her a sister.

Angela earned a Bachelor of Music and Master of Education from USC. She distinguished herself through academics, opera, Concert Choir, and as Drum Major of the Carolina Band. As an accomplished music teacher and director, her remarkable ability to interject fun, positive thinking, and determination along with a demand for excellence inspired thousands of students and parents. She was a National Board Certified Music Teacher, serving distinctively in Richland School District 2 schools Lonnie B. Nelson Elementary, Spring Valley High, and Forest Lake Elementary. She was also a highly respected and cherished church choir director at Eason Memorial Baptist, Kathwood Baptist, Eastminster Presbyterian, Washington Street UMC, and John Wesley UMC.

While perhaps best known for abundant musical talent and positive energy, most important to her was her faith, expressed frequently through her love of sacred choral music. Angela also had a quick wit, a knack for impressions, and a highly infectious laugh. She loved the beach, reading, musical theater, and the Gamecocks. She adored her many friends and cherished her family.

In lieu of flowers, Angela's fervent wish is for donations to be sent to John Wesley UMC of Charleston (626 Savannah Hwy, 29407). John Wesley supported her faithfully and generously during her employment and throughout her entire illness.

Angela's private funeral service is at her graveside at Saint James Anglican Church Cemetery.
To order memorial trees or send flowers to the family in memory of Angela Wyndham Powers, please visit our flower store.