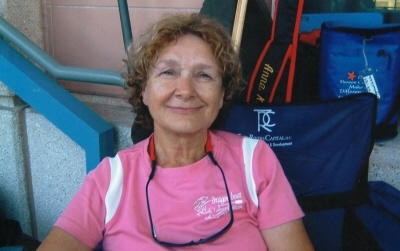 Anna Horoch Karlyk passed from this life into the arms of our heavenly father on 3/31/2021 at home surrounded by her loving family after a long battle with dementia which she fought with dignity and grace. Born to Paraskewia and Hryhorij Horoch in Hofgeisman, Germany. She immigrated with her family to Indiana, USA in 1949 after the war. In 1963 she met the love of her life, her husband and best friend of 55 years, John Karlyk. They moved to Charleston, SC where they raised their three children.

Anna graduated from Trident Technical College in June 1983 with an associate degree in chemical engineering technology. She was employed with the Westvaco Forest Research Division for 19.5 years.

Having suffered and beaten breast cancer she joined Dragon Boat Charleston where she was an active member. She competed in competitions throughout the United States and Canada. She, along with several other Charleston team members, was invited by a Canadian Dragon Boat team to Venice, Italy where she paddled in the Vogalonga, a regatta where hundreds of paddle boats travel a Grand Canal course.

Anna is survived by her loving husband, John; two daughters Kathryn Karlyk of Charleston, Theresa Karlyk of Beaufort; son David Karlyk (India Mathis) of Beaufort; David's two stepsons Tim Brutcher (Shelly) and their two sons, Tanner and Logan, all from Beaufort and Keith Brutcher of Columbia; and her caregiver and family friend, Annie Ward.
Anna was predeceased by her parents, Paraskewia and Hryhorij Horoch, and her sisters, Theresa Black and Maria Offerle.
A special thank you to Amedysis Hospice, her support team as well as her friends and neighbors.

In lieu of flowers, donations may be made to Dragon Boat Charleston, 1643 Savannah Highway #261, Charleston, SC 29407, or www.dragonboatcharleston.org.
To order memorial trees or send flowers to the family in memory of Anna Karlyk, please visit our flower store.

Church of the Nativity