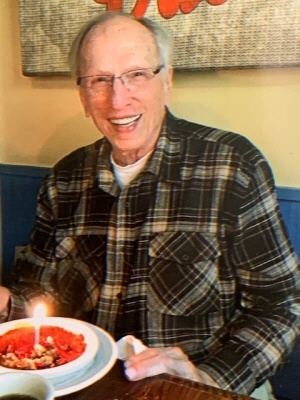 Dr. Arthur Cleveland Hutson, Jr., beloved family physician, husband, and father, passed away Thursday night, December 3, 2020, having bravely battled prostate cancer for nearly two decades. He was two months shy of his 90th birthday.  Cleve was born January 26, 1931, and spent his early years in the fields and tidal creeks of Beaufort, South Carolina. He was the only child of Cleve and Myrla Hutson. As a young boy he worked hard at his academics, his father's general mercantile store, and his beloved sports of basketball and football. He was graduated from Clemson University in 1954, a member of the last all-male, military class before Clemson became coed. Cleve met his first wife of 49 years, Sarah Sweet Evans, while at college. After their marriage in 1954, Cleve served in the U.S. Army for four years. He completed his Doctor of Medicine degree from the Medical University of South Carolina (MUSC) in 1960 and served a first internship and residency at Grady Hospital in Atlanta, GA. Upon returning to Beaufort, SC, Dr. Hutson established a successful private practice with Dr. Art Jenkins.

In 1970, Dr. Hutson left his Beaufort practice to become one of the three founding members of the Department of Family Medicine at The Medical University of South Carolina. Sinking his roots deeply into his new community, Cleve, as he was affectionately known, served as a doctor to thousands of Lowcountry patients and a professor and mentor to hundreds, if not thousands, of medical students and family medicine residents. In 1991, he was appointed chairman of the Department of Family Medicine and served in that capacity for a decade. During his nearly forty years at MUSC, Cleve also founded the Physician Assistant Program in Allied Health Sciences, an innovative effort to support community-based family practices by training and placing specially selected ex-military corpsmen. This program became a model for other areas of the country and earned Cleve the prestigious Family Physician of the Year Award from the South Carolina Academy of Family Physicians. This honor vaulted him into the running for the National Family Physician of the Year award; he placed as one of its top three contenders. Cleve also served as the Chief Medical Officer for the McClennan-Banks Hospital and helped to lead the medical district's recovery after Hurricane Hugo. Within the Medical University he chaired the University Task Force on Primary Care, the Education Task Force of Charleston Memorial Hospital, and the Committee on HIV Policy. Claiming that work was also his hobby, Cleve continued to practice medicine until he retired in 2019 at the age of 88. Post-MUSC, he worked as a physician with Palmetto Infusion Services, as a volunteer preceptor for the MUSC free CARES clinic in Mt. Pleasant, as a locum tenens physician to allow rural physicians much-needed vacations, as a reviewer for medically complex benefits claims with the Disability Determination Division, and as a performer of disability physicals for the South Carolina Vocational Rehabilitation Department.

Due to the pandemic all services will beheld privately. The family regrets not being able to celebrate Cleve's life with the greater community.