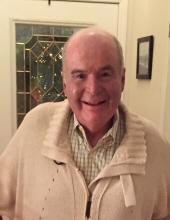 Born on July 12, 1935 in New Haven, CT, Tom was the son of the late Arthur Thomas Connor and Mary Connor.  He graduated from the Hopkins School (class of 1953) and went on to spend two years at Holy Cross College and two years at Bryant College, where he earned his bachelor’s degree in 1957.

Much of Tom’s career was spent as a Title Examiner, working first for the family law firm (Connor & Connor) in New Haven, later venturing out on his own with Nutmeg Title Co.  After living in several towns along the Connecticut shoreline he married and settled in Madison in 1970, where he lived until his move south to Charleston, SC in 2012. He was a lifelong baseball fan, loved to travel, and read; he was happiest with a stack of newspapers to get through each day.

In addition to his parents, he was predeceased by his wife of 30 years, Kathleen (Brusie) Connor, and his sisters Mrs. Virginia (Connor) Wrigley and Mrs. Joanne (Connor) Jasaitis. He is survived by his children, Arthur Thomas Connor III and Rosemary Connor, both of Charleston, SC, as well as several nieces and nephews.
Funeral mass and burial will be held in Madison in early spring.  Details will be shared at a later date.