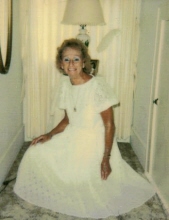 Charleston - Betty King Maxwell went into the loving arms of her savior Jesus Christ on Sunday, April 12, 2015 after a short battle with cancer. She was born a twin on February 22, 1927 in Darlington, SC to John Redmond and Gussie Anderson King. She had many memories of working the farm and tending the animals before graduating from Conway High. She soon after moved to Charleston where she met William (Billy) Maxwell. They married on June 7, 1947. She worked several jobs as a cashier, at Southern Bell, at JC Field as an accountant, and as a hotel manager at the Heart of Charleston and Castle Pinkney Inn, before finding her passion as a pharmacy tech at Medical Plaza Pharmacy. She worked there over 30 years with one of her best friends Leo Bruggemann. Her passions in life were gardening and taking care of any and all animals. Her dogs Candi and Kelli were the loves of her life. She continually had them by her side. She will be sadly missed by her daughters Sandra Maxwell and Marilyn Halavonich (Ron). She would have wanted to bless her youngest Sandra for the tender caregiving in her final years. She was preceded in death by her parents, ex-husband and a sister, Mary Tracy and numerous pets. Besides her children, she is survived by 3 grandchildren, Lauren and Lindsey Halavonich and Melissa Wilkinson; 3 sisters, Billie Hickman of Charleston, Nancy McCants Toole of Bremerton, WA and Rachel McClain of Nashville, TN. A graveside service will be held at 11:00 AM on Wednesday, April 15, 2015 at Live Oak Memorial Gardens, 3093 Ashley River Rd, Charleston, SC 29414. Memorial donations may be made in Bettyâ€™s name to Pet Helpers, 1447 Folly Rd, Charleston, SC 29412. Condolences may be viewed or submitted at www.mcalister-smith.com Arrangements were entrusted to McALISTER-SMITH FUNERAL HOME, JAMES ISLAND CHAPEL, 347 Folly Rd., Charleston, SC 29412, 843-614-8494.
To order memorial trees or send flowers to the family in memory of Betty K. Maxwell (King), please visit our flower store.