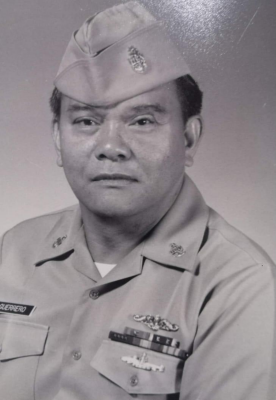 Bonifacio M. Guerrero Jr., 78, of Ladson, husband to Guadalupe Guerrero for 51 years, entered into eternal rest on June 20, 2020, surrounded by his family.

Born on August 09, 1941 in Lubuagan Kalinga Mountain Province, Philippines, he was the son of the late Bonifacio Guerrero Sr. and Juanita Guerrero.

Bonifacio, who went by the nickname Bugs, was a veteran of the US Navy and attained the rank of Senior Chief Petty Officer. As a Mess Management Specialist (MS), he served aboard the ships USS John Paul Jones, USS Eugene Greene, USS Bache, USS Grand Canyon, USS Tidewater, USS Waller, USS Canisteo as well as the submarines USS Daniel Boone, USS James K Polk and USS Stonewall Jackson where he earned his Submarine Specialist (SS) warfare designation. He also served in duty stations in Portsmouth, Norfolk and Charleston. He was an avid golfer, collector and enjoyed going on cruises and traveling around the world with his wife.

Besides his wife, Bonifacio is survived by his sister, Angelita Salcedo. He is also survived by his three sons and their families, Richard, his wife Jessica and sons Nicholas and Jackson of Summerville, Balder of North Charleston, and Charles, his wife Jill and son Franklin of Seattle. He also has many family members across the United States, the Philippines, Canada and the United Kingdom.

The service will be held at Immaculate Conception Church on Thursday, June 25, 2020 at 10:00 AM. The burial will follow at 11:20 AM at Plantation Memorial Gardens in Moncks Corner.
Expressions of sympathy may be viewed or submitted online at https://www.mcalister-smith.com/.