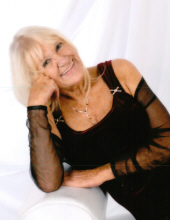 She was born on July 10, 1947 in Smoaks, South Carolina, daughter of Widdie Wheeler and Arthur Bramblett.

She is survived by her daughter, Rhonda Hunter Meehan (James), her son, Ralph Hunter (Tina), and her three grandchildren, Morgan Penn, Trenton Crawley and Alexander Hunter, all from Summerville, South Carolina.

Bonnie was originally from Orangeburg where she began her career with then Southern Bell as a switchboard operator. Bonnie built her career there where she became the first female Installer Repairman in South Carolina. She continued with Southern Bell through its changes until she retired from AT&T in 1998.

Bonnie enjoyed her retirement by spending time with her family, friends and two beloved dogs, "Holly" and "Little Boy". She loved being around people and parties while singing karaoke and traveling on many cruises.

The family will receive friends on September 12, 2019 from 2:00PM to 3:00PM at McAlister-Smith Funeral Home in Goose Creek.

A funeral service will be held immediately following family visitation at 3:00PM at McAlister-Smith Funeral Home, with burial to follow at Dorchester Memory Gardens in Summerville.