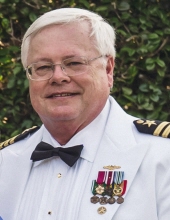 Born on March 2, 1957 in Pittsburgh, PA, Russ was the son of the late Russel Clair Keller and Ethel Jean Keller. Following his graduation with a BS in Mechanical Engineering from the U.S. Naval Academy in 1979, he earned a Masters in Public Administration from the John F. Kennedy School of Government at Harvard University in 1988.

Russ completed a 26 year career in the Navy’s submarine force. Several at sea assignments culminated in his command of USS SPRINGFIELD (SSN761). He subsequently served in the Navy’s Office of Legislative Affairs in Washington, DC, where he was a principal advisor to the Secretary of the Navy and the Chief of Naval Operations. Russ’ final active duty tasking was as the commanding officer of the Naval Nuclear Power Training Command in Charleston, SC. A second career as part of Advanced Technology International (ATI) enabled Russ and his family to put down roots in the Lowcountry. He managed technology transfer and startup opportunities through public-private partnerships with chief responsibility for the company’s Medical and Software Services division. This included serving as Senior Vice President for ATI and the Executive Director for the Global Alliance South Carolina, a private non-profit corporation created to stimulate education exchanges, research collaborations and business
partnerships with stakeholders in South Carolina, Israel and Estonia.

Russ valued the opportunity to serve in different roles at Mount Pleasant Presbyterian Church. He was an active member and leader for international mission work through collaboration with Daystar University in Kenya. Russ also used his gift of music to lift worship services with the playing of his trumpet, alongside his daughter and son.

Besides his wife, Russ is survived by his sister Barbara Keller Gray and her husband Ken; his daughter Kathryn Keller Ellis with her husband Robert Matthew Ellis and their children Emma Ainsley and Benjamin Russel of Mt. Pleasant, SC; and his son David Russel Keller with his wife Michelle Elise McInnis of Greenville, SC.

A Memorial Service will be held on Saturday, March 13, 2021 at 11 AM EST at Mount Pleasant Presbyterian Church, 302 Hibben St, Mt Pleasant, SC 29464. For those who wish to attend the Memorial Service please call the church at 843-884-4612 to reserve a seat, as social distancing guidelines are still in effect. Those who are unable to attend may view the service via the church’s Watch Live stream at www.mppc.net.

Interment will take place at the United States Naval Academy in Annapolis, MD. Date and time to be announced.

In lieu of flowers, memorial contributions in Russ` memory may be sent to the Naval Academy Alumni Association; Foundation and Mt. Pleasant Presbyterian Church’s endowment for local and international missions, which will benefit projects dear to Russ, such as Daystar University in Kenya and Bridge Builders in the Charleston area.