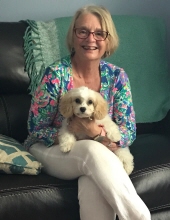 She was a force of nature, always ready to laugh, tell a story, share an opinion, and a bit of bling to brighten up a gathering. She was skilled at turning strangers into friends and friends into family. Wherever she went, she left indelible footprints into the hearts of the young and old.

She had a strong commitment to her Catholic faith and served the church in various capacities. She was a nurturer who wanted to make a difference, so she studied nursing at Gwynedd Mercy in Pennsylvania and returned home to Colebrook New Hampshire to begin her 45 year career as a nurse. She married George Allen Noyes III on April 29, 1972 and dedicated her life to supporting his career as they moved from one end of the country to the other.

She bore and raised five children Meegan, Amanda, Melissa, Adam and Sarah and still continued nursing, working in many specialty areas, before finally ending her career where she was a school nurse for 18 years at Westlake High in Waldorf, Maryland. Many kids came back to Westlake just to thank her for her excellent care, for helping them through a physical or emotional crisis, for career guidance and for her tough love that saw through "fake-initis", but recognized when they needed a haven.

She was a true caregiver in every sense of the word and unapologetically herself. She was a wife, mother, sister, neighbor and mentor to so many in her life. She had many "adopted" sons and daughters. People knew that she had an open door for them, a bed or a couch and an extra plate at the table.

She was a true warrior and fought depression, addiction and cancer. Her faith and spirit were often challenged, but she was incapable of giving up no matter how tired. She used her struggles to encourage others with their struggles. She was a sports junkie, loving all manner of sports, but especially her Red Sox, Blue Devils and Cowboys. She would sit in her chair watching a close game, crocheting yet another blanket for anyone that asked for one.

Carole is reunited with her parents, her brother John, her son Keir Lyles and all her beloved aunts and uncles; two angel grandbabies, that she is hogging, along with all the butter, in heaven.

In lieu of flowers, the family asks that you donate to the Florence Crittenton programs in Charleston, South Carolina.