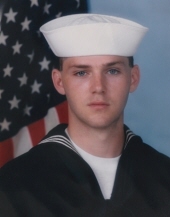 Charles B. Wilson, Jr., 51 of Walterboro passed away on Wednesday August 19, 2015. Chuck was born on March 11, 1964 in Jacksonville, Florida, a son of Charles Wilson, Sr. and Sandra Fussell Wilson. Chuck served in the United States Navy as a Sea-Bee during Desert Storm. He was a machinist and enjoyed working on hot-rods. He was a devoted family man. His family remembers him as a loving, hard working father. He had a wonderful sense of humor. Survivors include sons: Michael D. Wilson, Christopher B. Wilson, Edward C. Wilson and his wife Lilly of Ladson, Charles Wilson III of North Charleston, and Chad B. Wilson of North Charleston; two daughters, Crystal McClarnon of Goose Creek and Elizabeth McClarnon of North Charleston; parents, Charles and Sandra Wilson of Columbus, GA; sister, Christine Wilson Jones and her husband Ben of Columbus, GA; grandchildren, Ryan Edward Wilson and Dustin Brown, Jr.; nephew and niece Gabriel and Catherine Jones of Columbus, GA. A memorial service will be held at 4:00 p.m., Saturday, August 29, 2015 at McAlister-Smith Funeral Home, 869 St. James Avenue, Goose Creek, SC 29445 Interment will be at the Ft. Mitchell National Cemetery in Ft. Mitchell, AL. Expressions of sympathy may be viewed or submitted to www.mcalister-smith.com
To order memorial trees or send flowers to the family in memory of Charles B. Wilson Jr., please visit our flower store.