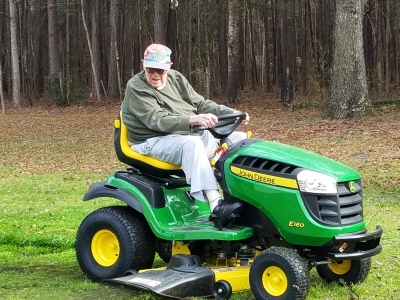 Charles Batie Lockaby, 92, of Ravenel, husband to the late Bernice Rusher of 33 years, entered into eternal rest on March 25, 2021, surrounded by his family.

Born on January 11, 1929, in Hendersonville, NC, Charles was a son of the late Thomas Batie Lockaby and Le Victor Bagwell Lockaby.

Charles was a graduate of Flat Rock High School "1947". He served in the US Navy from 1950 to 1954. Upon his discharge, he was employed with General Electric in East Flat Rock, NC. He then joined the Greyhound Corporation as a bus driver for 27 years. After retiring, he was a constable for Charleston County under Magistrate Judge George Tumbleston Jr. Upon retiring again, he devoted his time to his family and friends in Ravenel, Charleston and Henderson County, NC.

He loved working outdoors and being on his scooter raking leaves or on his Cub Cadet and John Deere lawnmowers.

He was predeceased by his brothers Robert Hugh and Tommy Burton Lockaby, a sister Rhonda Lockaby McCrary, all of Hendersonville, NC.

The family would like to thank Hospice of Charleston for their loving care of our father.