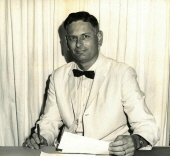 Dr. Charles Emile Aimar, 83, of Sullivan's Island, SC entered into Eternal Rest on Tuesday, June 3, 2014 in Charleston, SC. He was born on February 4, 1931 in Atlanta, GA to the late Emma Lou Aimar and Charles Emile Aimar and raised in Charleston, SC. Dr. Charles Aimar was a graduate of the College of Charleston, and a 1953 graduate of the Medical University of South Carolina. He interned at Philadelphia General Hospital and served with the Fleet Marine Corps as a Medical Officer in Korea and Japan. Dr. Aimar practiced family medicine in Darlington, SC, and he was founder and owner of the Coleman-Aimar Hospital. He served as the Southern 500 Raceway Physician for many years. While in Darlington, SC, he was an active community member and served as President of the Kiwanis Club, Board Member at the First Federal Savings and Loan Bank, and Town Council Member. He served on the Board of Directors for a local television station in which he was founder and part owner. Dr. Aimar had a wide variety of interests and loved to share his knowledge and time with people. His hobbies included playing the violin, windsurfing, sailing, and flying his own plane. He was a Ham Radio Operator and built his own electronics. In 1969, he was honored at the Opening Ceremonies of the Canadian World Fair and won a trip around the world for solving a worldwide contest. After retiring from the medical profession, he moved to Sullivanâ€™s Island and enjoyed the beach and spending time with his family. He will be deeply missed by his family including his wife of 55 years, Wilma Martin Aimar, and his four children; Emily Aimar of Sullivan's Island, Charles E. Aimar Jr. (Gaye) of Darlington, Janet Aimar Hayes (Cliff) of Mt. Pleasant, and Pamela Boulet (Fabrice) of Isle of Palms, and three grandchildren; Elizabeth Aimar, Charlie Aimar, and Carri Hayes. Family and friends are invited to attend his funeral service at 10 am, Monday, June 9, 2014 at McAlister-Smith Funeral Home, Mt. Pleasant Chapel, 1520 Rifle Range Road, Mt. Pleasant, SC 29464. Burial with Military Honors will be held on Tuesday, June 10, 2014 at the Beaufort National Cemetery at 12:00pm. Memorial contributions may be made to Sullivan's Island Fire and Rescue, Post Office Box 104, Sullivan's Island, SC 29482. Arrangements have been entrusted to McALISTER-SMITH FUNERAL HOME, MT PLEASANT CHAPEL, 1520 RIFLE RANGE RD., MT PLEASANT, SC (843) 884-3833. Expressions of sympathy may be viewed or submitted online at www.McAlister-Smith.com.