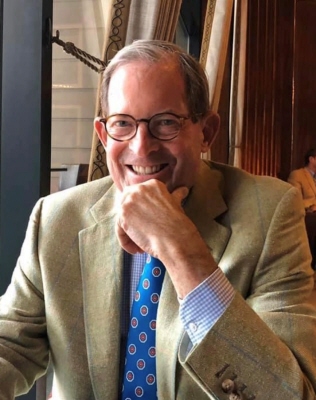 Christopher Smith came into this world on March 14, 1948, he left this world after a courageous battle with cancer on March 15, 2021.

He is survived by his best buddy and beloved wife of 48 years Julienne (Dougherty) Smith, his daughter Finley Smith of Boston MA, sisters Paula Smith of Pasadena CA. and Barbara Smith of Milton MA, nephews Roderick Smith II and Brian Mullin. He is predeceased by his parents Roderick and Virginia Smith, twin brother Roderick Smith Jr. and daughter Whitney Smith.

Born in Philadelphia, PA, he spent earlier years in West Hartford, CT; He attended
La Canada high school in Pasadena, CA and graduated from the University of Southern California in 1970. Chris met his wife Julie just after graduation while traveling for a job interview. They married in 1972 and created many happy memories and developed lifelong friendships while living in California, Connecticut, and South Carolina.

Professionally, Chris followed in his father's footsteps working numerous years with Connecticut General Life Insurance in California and Connecticut. After settling in Darien, CT he spent the balance of his career commuting to New York City working in the finance industry before retiring.

The majority of Julie and Chris's married life was spent in Darien, CT where they raised both of their daughters. Chris shared his passion for the sea and love of sailing which was a special gift he passed onto his beloved children. Most of their summers were spent on Shelter Island, NY sailing, golfing, spending time at the beach, cooking, and mostly creating cherished memories with special friends and family.

The past 9 years Julie and Chris have enjoyed their retirement in Charleston, SC.
Chris enjoyed being involved with the Preservation Society of Charleston, volunteering as a docent at numerous historical homes in the area, and attending classes at the College of Charleston. Many friends and new memories were made through their connections with First Scots Presbyterian Church, James Island Yacht Club, Country Club of Charleston and the local Porsche Club.

Chris had a larger than life personality and not afraid to be outspoken for the love of his country or to defend it at all costs. Possessed with a quick wit and engaging personality he could instantly befriend anyone and easily shared his laughter with others. He enjoyed the good things in life and was always up-to-date on such matters as world events, automobiles, music, clothing, food, and wine. His dapper style, started in college and carried him through his years in Southern California and Connecticut. He loved bow ties and dressing for events and was especially happy in his last years in Charleston. Most of all, he was a person who would be at your side in both good times and bad times. He was loyal, caring, optimistic and always had your back. The loves of his life were his beautiful family, his wife Julie and daughters Whitney and Finley (Scooter). We have lost a true gentleman, patriot and friend.

Memorial service will be at 1 p.m. on June 2, 2021 at First Scots Presbyterian Church in Charleston, SC. A celebration of life will follow the service at the James Island Yacht Club.
In lieu of flowers, the family requests that donations be made in his name to "Rocking the Boat" or the Trident Literacy Association.

To order memorial trees or send flowers to the family in memory of Christopher Hervey Smith, please visit our flower store.