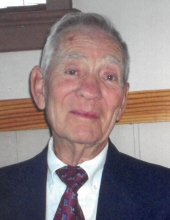 In addition to his parents, Ben was preceded in death by his brother, Harry Sharar and his grandson,Michael Guimond, Jr.

Ben served in the Army and the Army Reserves; serving in WWII and the Korean War. He retired from IBM after 25 years as a mechanical engineer. Ben was a member of Warrenton United Methodist Church and the American Legion. He was a true gentleman, who loved making people happy especially his great grand daughter, Alayna. He enjoyed the outdoors, playing games and especially loved playing golf.

Arrangements have been entrusted to McAlister-Smith Funeral and Cremation, 869 St James Ave, Goose Creek, SC 29445
To order memorial trees or send flowers to the family in memory of Clarence B Sharar, please visit our flower store.