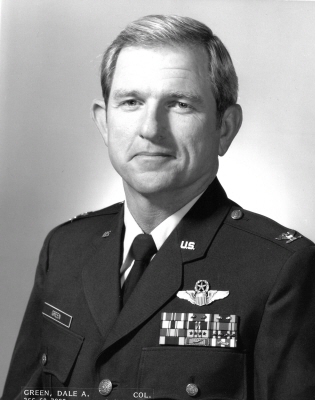 Dale was born April 15, 1944, in Decatur, IL to Wesley and Charlotte Green. Dale's father was a journeyman electrician on large construction projects and thus they moved frequently following jobs and projects.

Dale graduated from Andrew Jackson High School in Jacksonville, FL in 1962. He then continued to the Citadel, where he graduated in 1966 with a BS degree in Mathematics. Later, while stationed at the Air Force Academy, he earned and received his Masters Degree.

Dale joined the U.S. Air Force where he would enjoy a successful career for 26 years as a fighter pilot. He began his service flying missions in Vietnam and ended his flying career taking the 35th fighter wing to the Gulf War. Dale then worked for Lockheed Martin until his ultimate retirement in 2011. He was an avid fisherman, hunter, golfer, traveler, and Corvette driver. He and his wife enjoyed filling their bucket list of travels and adventures over the past twelve years.

Dale served the Lord with his local congregation at All Saints Lutheran Church in Mount Pleasant.

Dale will be laid to rest with full military honors in Arlington National Cemetery at a time yet to be determined.

In lieu of flowers, please send donations to Tunnel2Towers, 2361 Hylan Blvd, Staten Island, NY. 10306 or through their website
www.t2t.org