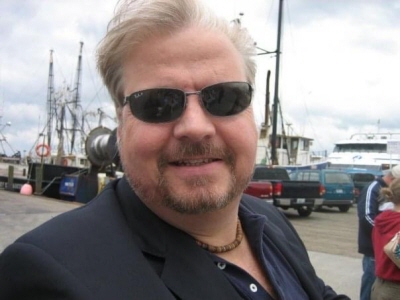 He is survived by his wife Heidi Neven and their bullmastiffs Duke and Ally, his sisters Stephanie and Susan, extended family, and many loving friends. He was predeceased by his parents Cyril Draddy and Joan Huber Draddy, and his brother Timothy.

Dan grew up in Manhasset, Long Island and spent most of his life in New York. He enjoyed a career in finance and worked as a Private Wealth Advisor for Lincoln Financial Group out of Syosset, Long Island. Dan loved living in Long Beach, Long Island and was active in the local beach volleyball community. Dan met his wife Heidi in New York and they moved to South Carolina many years later.

Once in Charleston, Dan was excited to finally buy his Harley and joined Low Country HOG Chapter 4774. He loved the free feeling of riding his motorcycle all over town, the state, and recently had taken a bucket list ride to Texas. Dan had a great love of craft beers. In fact, Dan and Heidi traveled the world searching for unique beers and original pint glasses to add to their collection. It was not uncommon to see them at a local brewery on a Saturday afternoon.

Dan was a foodie. He loved cooking and perfecting various international cuisines. Dan and Heidi often entertained friends with his culinary skills and colorful stories. His latest obsession was baking artisanal breads, which he was in the process of mastering. He delighted in trying new restaurants and researching the best ones in every city he visited, often calling the local newspaper food critics for recommendations.

Dan lived his life fully. He loved to try new things, go to new places, and make new friends everywhere he went. He and Heidi loved to travel and traveled all over the world. Their most recent travels took them to London and Australia where they made many new friends and had extraordinary adventures making wonderful memories. Despite their frequent travels, Dan's favorite place to be was sitting on the oversized couch next to his wife during baseball and football seasons. They watched the NY Yankees/NY Giants play while their beloved mastiffs snored at their feet. Dan enjoyed playing and watching sports since he was a boy. He also looked forward to teeing up on the golf course with his friends, Keith and Mario, whenever possible.

Dan and Heidi loved volunteering with a few mastiff rescue groups and fostered their first bullmastiff this year for Bullmastiff Rescuers Inc. The experience was wonderful and they planned on fostering more dogs in the future. Dan was a life-long learner. He was a walking encyclopedia before the internet. When he discovered YouTube he used it to teach himself many things from sailing and camping to complicated cooking techniques and elaborate shoe-shining. One of his secret claims to fame was playing Santa Claus for a friend's annual alley party. His knowledge of popular toys and reindeer names, as well as facts about living at the North Pole were mesmerizing to the children.

Dan was a larger than life, kind, funny, caring man. He was the first one to offer to help anyone with repairs on cars, boats, or in their homes. He loved and he was loved. He will be deeply missed by his family and friends. Due to COVID restrictions, services will be held at a later date.

In lieu of flowers, memorial contributions in Daniel`s memory may be sent to Bullmastiff Rescuers, Inc. (bullmastiffrescuers.net).

Your stories of Dan and expressions of sympathy may be viewed or submitted online at www.mcalister-smith.com.