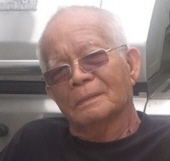 Danilo Banawa Jose, 75, of Goose Creek, died May 20, 2015. Born in Cavite City, Philippines, he was the son of the late Jose and Apolonia Jose and husband to Emelita Jose. After high school, Danilo joined the United States Navy, retiring as a Chief Petty Officer after twenty years of service. He also worked as an Electrician at the Charleston Naval Shipyard. Mr. Jose enjoyed fishing, gardening, cooking and loved being with his family. He was a member of Immaculate Conception Catholic Church. Danilo will be remembered as a handy man and was always willing to help his friends and family with any project they had. He is survived by his wife of forty- seven years, Emelita Jose; four children, Aries Jose of Summerville, Janet Hall and husband Rick of Summerville, Jeffrey Jose of Hickory, NC and Joey Jose and wife Kimberly of Moncks Corner; grandchildren, Cordelia, Catherine, William, Emelita, Riley, Devon, Gabrial, and Caden; great-grandchildren, Layne, Keeley, and Wyatt. Danilo is also survived by his brothers, sister, half-brothers, half-sisters and many close friends. Mass of Christian burial will be held, Monday, May 25, 2015 at 10:00 am in Immaculate Conception Catholic Church 510 St. James Avenue, Goose Creek, SC 29445. Burial will follow in Plantation Memorial Gardens, Moncks Corner. The family will receive friends on Sunday, May 24, 2015 from 3:00 pm until 5:00 pm at MCALISTER-SMITH FUNERAL HOME, GOOSE CREEK CHAPEL, 869 St. James Avenue, Goose Creek, SC 29445. Expressions of sympathy may be viewed or submitted at www.mcalister-smith.com
To order memorial trees or send flowers to the family in memory of Danilo B. Jose, please visit our flower store.