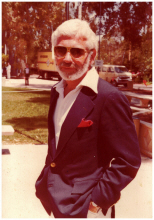 David Eugene Grant, only son of the late Eugene and Ellen Grant, entered eternal rest at 11:11am on Sunday July 3, 2016. David was born on September 11, 1935 in Los Angeles, California, and in his 80 years on this Earth, David accomplished much in life. He was Editor of his college newspaper at Loyola Marymount University in Los Angeles, and after graduating he put his endless creativity and love of writing into action in the world of advertising. During his long career he won numerous awards, including Best of Show at the 1986 Advertising Federation of Charleston Awards. It was during his tenure in the marketing department at Sea World in San Diego that he met Miss Roberta Roberts, whom he fell in love with and eventually married. The newlyweds settled in the seaside suburb of La Jolla, California. Soon after, they welcomed their first child, Devin, in 1970, followed a year later by another bundle of joy, Andrea. Two more children, Dylan and Kathleen eventually joined the brood in 1977 and 1980 respectively. In 1982 David accepted a new job with an advertising agency in Mount Pleasant, SC. The family traveled across the country to their new home in Charleston. Once established in the Lowcountry, David easily grew to love his new Southern surroundings. After moving downtown from Mount Pleasant and starting his own ad agency, D. Grant & Sons, David suffered the loss of his beloved Roberta in 1988. Several years later he met and soon married Sheila Geoghegan, and with all four children grown and retirement a reality, David settled in at his downtown address, frequenting coffee shops on the peninsula such as Clara's and Kudu, where he played chess and discussed his favorite subject, Shakespeare, with his countless friends. He continued to write throughout his life, publishing several books, including â€œBeing Shakespeare,' 'Hope To Die,' and 'Dumbstruck.' David was a lifelong supporter of the arts, and contributed a considerable amount of his time and passion toward various arts endeavors in both San Diego and Charleston, including the Old Globe Theatre and the Gibbes Art Gallery. David is survived by his wife, Sheila Grant, his sons Devin Grant and Dylan Grant, daughters Andrea Davis and Kathleen Grant, and grandchildren Nigel, Grant, Oliver, and Ellason. The family will receive friends on Wednesday, July 6, 2016 from 5-7pm at McAlister-Smith Funeral Home, James Island Chapel. A Mass of Christian Burial will be held at 10am on Thursday, July 7, 2016 at St. Maryâ€™s Roman Catholic Church, 89 Hasell St, Charleston, SC 29401. Rite of Committal will follow the service at St. Lawrence Cemetery, 60 Huguenin Ave, Charleston, SC 29401. In lieu of flowers the family asks that you make a contribution to Charleston Friends of the Library. Condolences may be viewed or submitted at www.McAlister-Smith.com. Arrangements were entrusted to McALISTER-SMITH FUNERAL HOME, JAMES ISLAND CHAPEL, 347 Folly Rd., Charleston, SC, 843-614-8494.
To order memorial trees or send flowers to the family in memory of David E Grant, please visit our flower store.