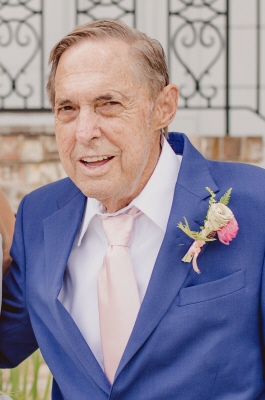 David Mason Palmer died unexpectedly Monday, November 23, 2020, at his home in Englewood, Florida, at the age of 76.

David was born January 11, 1944, in Pittsfield, Massachusetts to Lawrence Earl Palmer and Martha Dean Brown. From 1963 to 1967, David enlisted in the United States Air Force and served as a crew chief. He was stationed in Okinawa, Japan, 1964-65, serving some time in Vietnam during that period. In 1966, he was stationed at Charleston (SC) Air Force Base. It was in Charleston, he met Patricia Ann Moody; they married that year. Their family grew immediately having two children by the end of 1967. From 1967 to 1978, the family lived in Windsor, Massachusetts. He and his brother, Larry, built a two-story home, doing most of the labor themselves, for David's young family. David and Patricia owned their own business, the Plaza Spirits Shoppe in North Adams, MA, from 1974 to 1978. In 1978, the family moved back to Charleston. David's first job in paint sales was at the House of Paints, a small business owned by Patricia's sister on James Island. He was a natural, making for himself a career in paint sales working over the years in Charleston at Hughes Lumber Company, William & Bird, Home Depot, and Lowe's Home Improvement as paint salesman or Paint Pro. In 1986, the family welcomed a third child just as their first two were going out on their own. In 2013, David and Patricia divorced. David subsequently retired to Florida.

David drag raced cars as a teenager winning multiple trophies. His love of cars and racing led him to be a long time fan of NASCAR. His favorite drivers were Dale Earnhardt and later Dale Junior. During his retirement, he and Terri traveled around to racetracks throughout the south. For many years, he owned a series of Corvettes. David also enjoyed boating and fishing Charleston's waters with various boats that he owned. He placed in several offshore fishing tournaments. He passed on his love of racing and boating to his kids.

In June of this year, David walked his youngest daughter down the aisle. The family is ever grateful we were able to be together for this joyful time as well as the celebration event in August.

David will be cremated in Englewood. However, a memorial service will take place at McAlister-Smith Funeral Home James Island at 347 Folly Road, Charleston, SC 29412 on Saturday, December 12, 2020. Private gathering for the family starts at 12pm; public gathering begins at 1pm and a memorial service will be at 2pm. Please observe guidance on masks and social distancing. If you are feeling unwell, please do not come. The service will be live-streamed. Details to follow .

In spring 2021, David's cremains will be laid to rest in Pittsfield, Massachusetts, next to his parents and other Palmer family.

In lieu of flowers, donations can be made in memory of David to the NASCAR Foundation at https://www.nascarfoundation.org
To order memorial trees or send flowers to the family in memory of David Mason Palmer, please visit our flower store.