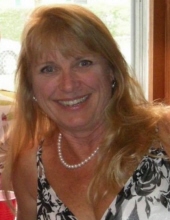 Debra (Deb) Malcom Barnett, 66, of Charleston S.C. passed away peacefully in her sleep on December 27th.
She was born to Dale and Betty Malcom in Cozad, Nebraska on April 13, 1952. Deb graduated from Cozad High School in 1970 and received a B.A. in Elementary Education from the University of Nebraska in Lincoln. She later earned a degree in Christian Education from United Theological Seminary in Minnesota and then received her Masters of Divinity from Duke University.
Deb was preceded in death by her father, Dale Malcom, and her son, Matthew Paulsen. She is survived by her husband, Allen Barnett; her son, Jared Paulsen and his wife Jessica; her stepdaughter, Elizabeth Wilson and her husband, Matt; and by her grandchildren, Dale, Stella, Wesley, and Quinn. She is also survived by her mother and stepfather, Betty and Henry Vogt of Gothenburg, Nebraska; her brothers, Dave and Don Malcom of Cozad, Nebraska, their families, and numerous cousins, nephews, and nieces.
Deb adored her grandchildren and loved camping, snow skiing, boating, fishing, playing card games, being with her dogs, and spending time with her family. She led numerous churches in her 32 years as a Methodist minister. After retiring, she spent her free time scrapbooking and creating jewelry. She volunteered weekly at the Hope Lodge in downtown Charleston, teaching jewelry making to other cancer patients and their caregivers. She was affectionately known as the Jewelry Lady.
Her celebration of life will be held on Saturday, January 5th at 11 a.m. at Epworth United Methodist Church on James Island. The family requests that donations be made to Hope Lodge at 269 Calhoun St, Charleston S.C. 29401 in lieu of sending flowers.
Expressions of sympathy may be viewed or submitted online at www.mcalister-smith.com.
Arrangements have been entrusted to McAlister-Smith Funeral Home, James Island , 347 Folly Road, Charleston, SC 29412, 843-614-8494.
To order memorial trees or send flowers to the family in memory of Debra Barnett, please visit our flower store.