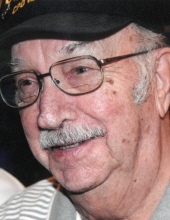 Earl Simmons Smalley, Sr., 93, of Charleston, SC, husband of the late Dolores Mitchum Smalley and a WWII Veteran, went back to God on Wednesday, August 8th, 2018 surrounded by love. His entire family was blessed by his life and his death.
Earl (or Papa as he was affectionately known) was born on a farm in Peebles, OH in 1925 and joined the United States Navy at 18. The Navy brought him to Charleston where he met his wife in 1945. From that day forward, Charleston became his hometown. Earl and Dolores bought their home at 2620 Church Creek Drive in 1965 and created a safe haven for four generations of Smalleys. He lived independently in his home for 53 years – a source of great pride. He will be remembered most for living the values of the Greatest Generation: service to God and country, commitment of marriage (55 years) and unending support for family and community. He taught us all how to love each other.
Smalley’s work life included 20 years United States Navy active duty including the Pacific Campaign of WWII, 15 years Charleston Naval Shipyard civil service and almost 30 years as a daily advisor to Smalley Trucking and Celek & Celek Construction.
He is survived by his Charleston family: son, Earl Smalley Jr. (Lynn); grandson, Earl Smalley III (Leigh); daughter-in-law, Linda Smalley; daughter-in-law, Debbie Smalley; grandson, Eric Easterling (Chris) grandson, Elliot Smalley (Lisa); granddaughter, Jennifer Smalley; grandson, Danny Smalley; granddaughter Heather Riffle (Mikie); grandaughter Loraine Reed (Jimmy) and great-grandchildren: Earl IV “Jake”, Kade, Toby, Freddie, Cooper, Harper, Benton, Mason, Deagan, Sadie. He is also survived by his Ohio family: brother, Ray Smalley (Norma); sister, Jane Reed; sister, Mary Galley; and their children and grandchildren.

Visitation will be Sunday, August 12, 2018 from 5pm to 7pm at McAlister-Smith Funeral Home West Ashley.

Family and friends are invited to his Celebration of Life at 10:30 AM on Monday, August 13, 2018 at Old St. Andrew’s Parish Church, 2604 Ashley River Road, Charleston, SC 29414. Burial, with military honors, will take place immediately following the service at Live Oak Cemetery, 3093 Ashley River Road beside his wife, Dolores and sons: David and Ernie. A lunch reception will hosted by the family back at the church after the burial.
Flowers will be accepted or memorials may be made to the Wounded Warrior Project “in memory of Earl Smalley Sr” online at www.woundedwarriorproject.org or P. O. Box 758517, Topeka, KS 66675-8517.
Arrangements entrusted to McALISTER-SMITH FUNERAL HOME, 2501 BEES FERRY ROAD, CHARLESTON, SC 29414, 843-722-8371.
To order memorial trees or send flowers to the family in memory of Earl Simmons Smalley Sr., please visit our flower store.