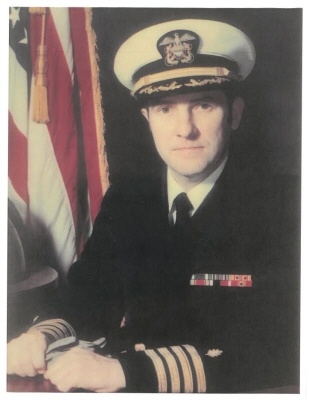 Captain Edmund Brown "Mickey" McMahon, MD, a former Commanding Officer of Naval Hospital, Charleston, entered into eternal rest on October 17, 2020. Dr. McMahon was born in Colchester, Vermont on June 23, 1926, the grandson of Dr. and Mrs. Edmund T. Brown and Mr. and Mrs. Michael Devitt McMahon and the son of Dr. Karl C. and Mildred B. McMahon.

He served as a Navy Hospital Corpsman in the Pacific during World War II, participating in the invasion of Iwo Jima and Okinawa and the occupation of Japan. Following the war, he returned to school, receiving both his undergraduate and medical degrees from the University of Vermont.

Dr. McMahon then returned to active duty in the U.S. Navy, where he served in numerous clinical and administrative billets, until his retirement in June 1985. His awards include the Navy Commendation Medal, the Meritorious Service Medal, and the Legion of Merit.

After retiring, he moved to the Isle of Palms, where he was an active member of the Wild Dunes Community Association, serving on its Board of Directors and as Treasurer. He was a member of Stella Maris Catholic Church, the Stella Maris Men's Club, and the Knights of Columbus. He was Volunteer Ticket Chairman for the Volvo Tennis Tournament for 18 years and volunteered at Stella Maris and at Meals on Wheels, well into his 90s.

Mickey was the quintessential Irishman. His greatest loyalties were to his country, his God, and his family. He was a devoted husband and a beloved father. He loved people and made friends easily. He had a gift for storytelling and an enthusiasm for life, greeting everyone with an infectious grin and a warm handshake. He will be long remembered and deeply missed.

The funeral service will be held on Saturday October 24 at 11am at Stella Maris Catholic Church,1204 Middle St, Sullivan's Island, SC 29482. Per Covid-19 restrictions, there will be limited seating in the church, masks will be required, social distancing is advised, and the Mass will be live-streamed. A link will be sent to family and friends. Captain McMahon's body will be laid to rest in Arlington National Cemetery.

Expressions of sympathy may be viewed or submitted online at https://mcalister-smith.com