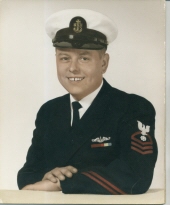 Edward Frank Frederick passed away Monday, September 26, 2016 at Hospice Savannah, surrounded by his family. He was born March 30, 1938 in Cincinnati, OH to Edward Charles and Katherine Joos Frederick. He joined the Navy Reserve in high school and upon graduation committed 21 years to the Navy as a submariner, earning the highest enlisted rank. Upon retirement he earned a BS in accounting at the College of Charleston and began his second career as a CPA, as Comptroller of Ruscon Construction Co. and Yeamans Hall Country Club. He also prepared taxes for Wilson & Quirk CPA through 2015. He was a former Grand Knight in the Knights of Columbus and a member of the American Legion, Post 147. He is survived by his beautiful wife of 58 years, JoAnn (nee Watson); daughters, Susan Stewart (Dave) of Prosperity, SC and Patricia King of Savannah, GA; son Christopher Frederick (Amy) of Atlanta, GA; grandchildren, Danielle Burke (Steven) of Chicago, IL, Landon King of Savannah, GA, Megan King of Atlanta, GA, and Elizabeth and Jack Frederick of Atlanta, GA; step-grandchildren, Stephanie, Douglas, Brad and Callum Stewart of Columbia, SC; and his brother Deacon Jim Frederick of Radisson, WI. In addition to his parents, he was predeceased by his daughter Mary Lynne Frederick. A Mass of Christian burial will be held at 11am on Wednesday, September 28, 2016 at Church of the Nativity, 1061 Folly Road, Charleston, SC, 29412. A Rite of Committal will immediately follow at Holy Cross Cemetery, James Island, SC. The family will receive friends from 6-8pm on Tuesday, September 27, 2016 at McAlister-Smith Funeral Home, James Island Chapel. The Rosary will be prayed from 6:30 to 7pm. Condolences may be viewed or submitted at www.McAlister-Smith.com. Arrangements were entrusted to McALISTER-SMITH FUNERAL HOME, JAMES ISLAND CHAPEL, 347 Folly Road, Charleston, SC 29412, 843-614-8494.
To order memorial trees or send flowers to the family in memory of Edward F. Frederick, please visit our flower store.