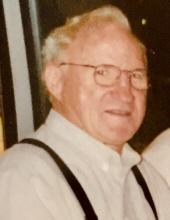 Edward Joseph Parent, 86, of Charleston, husband of 42 years to Ann F Hofbauer, entered into eternal rest on December 13, 2019, surrounded by his wife and friends.

Born on January 24, 1933 in Syracuse, he was a son of the late Edward B. Parent and Helen Leflett Parent.

In 1956, when Ed graduated from the Naval Academy with an Engineering Degree, he was sworn into the Air Force and flew active duty missions as a Navigator, with his brother Michael, who was a pilot in the Air Force. They were both stationed at the Charleston Naval Air Station, in the 1950's, now known as Joint Base Charleston. Ed left active duty Air Force to enter Catholic Seminary in Rochester, NY and Haverhill, MA, where he studied for several years. He was sent as a Parish Priest to Binghamton, NY, where he taught mathematics and coached wrestling and golf. He remained in the NY Air National Guard and was reactivated as a Catholic Chaplain in the USAF. Ed volunteered for Vietnam, but was sent to Iceland for a year and later was reassigned to Charleston and retired with rank of Captain and settled in Charleston in 1974. Ed earned his Master's Degree in Mathematics from University of Syracuse, Master's Degree in Counseling Psychology from Southern Illinois University Edwardsville and a MBA from Central Michigan.

Ed was employed at the Charleston Naval Ship Yard, as a Chief Test Engineer for the Submarines, where he took them down to test depth levels, until he retired in 1993, when the shipyard was preparing to close. He then became an adjunct professor at the College of Charleston, where he taught computer science. He also found time to study Aikido and Karate since 1974, under Roy Suenaka, and became a Black Belt Aikido Instructor and founded the College of Charleston Aikido Club.

Ed was a member of and Past Master of Landmark Lodge, a past Grand Lodge Officer, a Knights Templar and was given the JROTC Award. He was a member of American Legion Post 147, the US Naval Academy Alumni Association and Foundation and a member of the American Society of Engineers, where he received a Certificate of Appreciation. Ed also had a lifelong love for golf and wrestling. He had an unending thirst for knowledge.

Ed was predeceased by a nephew, John Parent; niece, Laura Parent and a sister-in-law, Judy Parent.