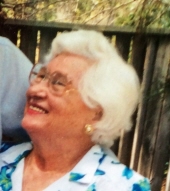 Emilija Montvidaite Kutkus, passed away at Superior Residences in Niceville, FL on September 1, 2015. She was born June 11, 1922, in Lithuania, and fled her home in June of 1944. Emilija and her husband, Leonardas (1922-2006), spent five years in post-war Germany living in displaced persons camps before emigrating to the United States in 1949. They established themselves in the Detroit area, where he was a research and design engineer for Chevrolet and they raised five children. Emilija is survived by son Arunas (Carla), daughters Jurate Burns (Matt), Kristina Montvidas Kutkus, Rasa Gilbert (Mario), and Rita Steele (Robert.) She leaves behind five grandchildren, Matt Burns, Jr. (Jennifer), Jeff Burns (Lindsey) Collin Gilbert (Jessica), Miarasa Steele, Miles Steele and two great-granddaughters, Gabriella Marie Burns and Roselyn Gilbert. Emilija was a devout Catholic, generous to a fault, always ready to help in any way she could. She retired to Mt. Pleasant, SC in 1989 and lived there for 24 years. In lieu of flowers, she wishes memorial donations go to the Child's Gate to Learning, PO Box 381, Downer's Grove, IL 60515. Friends and family are invited to the Visitation, on Thursday, September 10, 2015 between the hours of 7:00 PM and 8:30 PM at McAlister-Smith Funeral Home, 1520 Rifle Range Road, Mt. Pleasant, SC 29464. The Rosary will be recited at 7:00 PM. A Mass of Christian Burial will be held on Friday, September 11, 2015 at the Cathedral of St. John the Baptist, at 10:00 AM, Burial to follow at Holy Cross Cemetery. Expressions of sympathy may be viewed or submitted online at www.McAlister-Smith.com. Arrangements have been entrusted to McALISTER-SMITH FUNERAL HOME, MT PLEASANT CHAPEL, 1520 RIFLE RANGE RD., MT PLEASANT, SC (843) 884-3833.

Service:
Friday, September 11, 2015
To order memorial trees or send flowers to the family in memory of Emilija Kutkus, please visit our flower store.