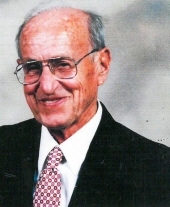 Erhard Edwin Stiepel, of Mt. Pleasant, SC died peacefully on December 23, 2014. Erhard was born and educated in Germany, graduated from the institute of Technology, Stuttgart, Germany and the Research Institute for Textiles Reutlingen, Germany. He worked as a wool buyer in S. Africa, New Zealand, and Australia for 2 years before becoming Production Engineer with a German Worsted Yarn Spinner. In 1954 he and his wife immigrated to the U.S.A. He was employed as a Design Engineer by Saco Lowell, a textile machinery company, in Biddeford, Maine. In 1959 he headed their Research Dept. in Clemson, S.C. He was associated with them from 1954-1970. He made many contributions to the firm's development of textile machinery. Various patents are registered in his name. In 1970 he became Manager of Crompton & Knowles Textile Machinery group in Mauldin, S.C. In 1974 he was recalled to Saco Lowell, Easley as Vice-President of Engineering; a job he held until his retirement in 1991. He then became a consultant in engineering/textile related matters. He and his wife traveled widely. He will be remembered for his optimism, cheerfulness, boundless energy, and love of tennis. He was a loving husband, father and grandfather who enjoyed outdoor activities with his family. He put strong emphasis on education. Surviving are his loving wife Margret Stiepel of 61 years, Children: Angela Case (Stan), Christine Osborne (Wayne), Norbert Stiepel (Patricia) all of Mount Pleasant, S.C., Grandchildren; Wayne Osborne, III (Mandy), Kyle Osborne and Noah Stiepel and nephews. Very special thanks go to his dedicated caregivers who brightened his last days. A memorial service will be held on Sunday, December 28, 2014 at 2:00 pm, Mt. Pleasant Presbyterian Church. 302 Hibben Street, Mt. Pleasant,SC. In lieu of flowers memorial donations may be made in his honor to the Stanley W. Case Endowed Memorial Scholarship at the Univ. of Central Oklahoma, 100 N. Univ. Drive, Box 133, Edmond, O.K. 73034 or online at stanleycasescholarship.org Expressions of sympathy may be viewed or submitted online at www.McAlister-Smith.com. Arrangements have been entrusted to McALISTER-SMITH FUNERAL HOME, MT PLEASANT CHAPEL, 1520 RIFLE RANGE ROAD, MT PLEASANT, SC (843) 884-3833.
To order memorial trees or send flowers to the family in memory of Erhard E. Stiepel, please visit our flower store.