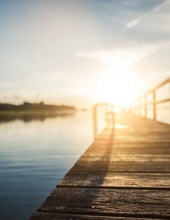 Ernest Acosta entered into eternal rest on September 11, 2020, from complications of a stroke he suffered in May.

As a child he loved radio shows and going to the movies, a love that lasted a lifetime. Following graduation from Benjamin Franklin High in 1950, he worked in bakeries, married and began a family with Martha Negron. Eventually he went into the Army to fight in the Korean War. During the Korean war, he wound up stationed in Luquillo Beach Puerto Rico, waiting to be shipped to Korea - an order that never came. Instead, Ernie had time to explore his Puerto Rican heritage further.

Returning to the mainland, he moved to Washington DC and began his 38 year career in the US Government. There he met his wife Dorothy, married and raised a family in the suburbs of Washington DC for over 30 years.

Upon Dorothy's passing in 2005, Ernie moved to Doylestown PA to be with his daughter and grandchildren and was charmingly called the "King of Doylestown", because he knew every nook and cranny of the town, enjoyed polo matches, and dining out with friends. There, he also continued his lifelong hobby of playing chess.

Ernest moved to Mount Pleasant, SC, when his daughter's family relocated there 4 years ago and he greatly enjoyed warm winters, exploring a new town and spending time with his grandchildren.

In consideration of the health of all, the family plans to have a memorial service at a later date.

Inurnment will be at Mountain View Cemetery in Sharpsburg, Maryland.