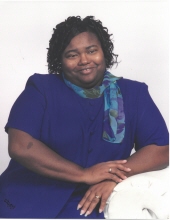 Florine was born August 14, 1969 to the parentage of Gloria Simmons and the late Walter Simmons Sr.  She was preceded in death by her daughter, Carmen Manson,  her father, Walter Simmons Sr and father-in-law, Charlie Manson Sr.

Florine never met a stranger and loved to make people laugh. She was happy to make conversations with anyone and to make them smile and laugh. Florine received an Associate of Arts in Foreign Languages from Macon State College, 1996.  She was an author and poet. She had her own publishing company called Carmenita Books.

Funeral Services will be held on Wednesday, 1:00 PM, January 29, 2020 at McAlister-Smith Funeral & Cremation, 869 Saint James Ave, Goose Creek, SC 29445. Visitation with the family begins at 12:00PM. The 2nd Funeral Service held in GA, day and time to be determined at a later date.

Arrangements by McAlister-Smith Funeral & Cremation.
To order memorial trees or send flowers to the family in memory of Florine Manson, please visit our flower store.