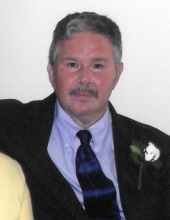 He was born on June 24, 1959 in Panama City, Panama, son of Gladys Cruz and Floyd Johnston. Floyd moved a lot during his childhood due to his father being a Marines Sgt. Gunnery. His later years were spent in Quantico, Virginia.

Floyd was preceded in death by his parents.

Floyd was very loved by his wife and family. He worked as a top technician for Service Master. Later he worked with his wife in managing the Jeanie Drucker Gallery.

The family will receive friends and share a meal on Saturday, April 6, 2019 from 7:30 PM to 8:30 PM at McAlister-Smith Funeral Home, James Island. A memorial service will follow at 8:30 PM at the funeral home.

Memorial contributions may be made to Kahal Kadosh Beth Elohim Synagogue at 90 Hasell Street, Charleston, SC 29401.