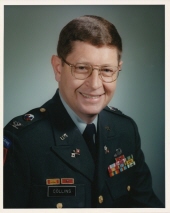 Colonel Francis J. Collins, 72, of Goose Creek, South Carolina, passed away peacefully on February 16th after fighting a courageous battle with cancer. Frank was born in Salem, Massachusetts on September 26th 1942. He was the only son of Richard and Helen Collins. His early education occurred at St. Johnâ€™s Preparatory School in Danvers, Massachusetts. He received an appointment to The United States Military Academy at West Point, New York and graduated with the Class of 1964. Frank met his future wife on a blind date while at West Point. They were married on July 17, 1965. Claudette passed away in April of 2007. After graduation from West Point he received his commission as a second lieutenant in the U.S. Army Signal Corps. For the next twenty-nine years he would serve his nation in both peace and war. He was a part of the 82nd Airborne Division in support of â€œOperation Powerpackâ€ in April of 1965 (Dominican Republic) and served two tours in Vietnam. Other assignments included Heidelberg, Germany and many years at Ft. Monmouth, New Jersey. Frank retired from the army in 1993. Upon his retirement, Frank and Claudette moved to South Carolina having fallen in love with the area while visiting their sons at The Citadel. He was the Director of the Lowcountry Regional Math and Science Center for a number of years. Frank was a voracious reader and was never far from a book on military history. He loved traveling with his family and retuned to Europe many times. Frank was a long-time member of the Disney Vacation Club and experienced many happy vacations there with his family. He is survived by his son Richard Collins and his wife Cynthia of Bennington, Vermont; his daughter Kathleen Marsico and her husband John of Greenwich, Connecticut; his son LTC James Collins, his wife Amy, and their daughter Gretchen of Ft. Riley, Kansas; and of course his beloved bulldog Molly. Services and burial will take place at St. Josephâ€™s Cemetery in Lowell, Massachusetts.

Service:
Funeral service will be held in the chapel of St. Josephâ€™s Cemetery, East Chelmsford, MA. Burial will follow in the cemetery.
To order memorial trees or send flowers to the family in memory of Francis John Collins, please visit our flower store.