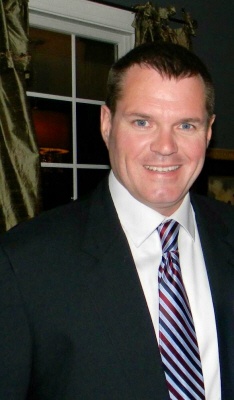 Francis Patrick Corrigan, 51, passed from this life unexpectedly on Friday December 11, 2020, surrounded by his loving wife, Wendy, and his family by his side. He was a masterful writer and storyteller, life of the party, and had an incredible, biting sense of humor.

Frank was born in Washington, DC on November 1, 1969, All Saints' Day, as he would be sure to point out. He was the son of the late Charles Richard Corrigan & Nancy Katherine Corrigan. He attended Blessed Sacrament Elementary School, Gonzaga High School, and went to college in Syracuse, NY at LeMoyne College where he earned a BA in English. Upon graduation in 1992, Frank returned to Washington DC where he began his career as an Advertising Manager at the Chronicle of Higher Education.

Frank married the love of his life, Wendy Lynn Corrigan, on August 12, 1995. They were college sweethearts, inseparable from the moment they met 32 years ago and recently celebrated their 25th wedding anniversary. Frank would be certain to say his biggest accomplishment in life was raising their son, Quinn Matthew Corrigan, and molding him into an amazing young man. There was never a father more proud of his son than Frank, and he'd be sure to let everyone he ever met know it. In 2006 the family moved to Mount Pleasant, SC, which Frank later recalled as one of the best decisions of his life. The beaches and waterways of Charleston were his happy place. He could often be found walking the sands of Sullivan's Island or on the Intracoastal Waterway in his beloved Boston Whaler, fishing for reds, sheepshead, and the occasional shark.

Frank's other passion was lacrosse. He played in high school and college and put a stick in Quinn's hands from the moment he could walk. He was instrumental in beginning the sports recreational league in Charleston. Coaching his son's team for several years was his biggest joy. He reveled in sharing his passion and love for the sport. He was a mentor and taught his players how to work hard and be their best on and off the field. He helped mold them into the responsible young men they are today.
Frank's legacy was bringing humor and joy to peoples' lives, and we all loved him for it. So whether you knew him as Francis, Frank, Frankie, Sergio, Coach, or Dad, consider yourself lucky, for you now forever have a piece of him with you, as he gave of himself wholeheartedly and without pretense. He was the most transparent, authentic, and genuine person there ever was. So with broken hearts we will mourn him and miss him dearly, but we will also laugh while we reminisce about our time with him, because it's impossible not to.

A celebration of Frank's life will be planned for a later date.