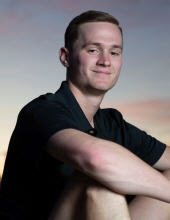 Born on September 30, 1997, in Charleston, SC Frank is the son of Frank Mitchell Arnold IV and Kristen R. Arnold. Frank, an accomplished musician and athlete, was a member of JRDF Palmetto Chapter, University of South Carolina Wind Ensemble, Symphonic Winds, and the Carolina Band, as well as a brother of the Phi Mu Alpha Delta Sigma, and enjoyed performing. He was a charismatic leader, an All State Band selection, and a member of the prestigious Charleston Symphony Youth Orchestra.

Frank battled Type 1 diabetes over the course of his life with ferocity, courage, and resilience, and was the recipient of the Strength Award as a varsity wrestler for his inspiring ability to overcome obstacles. Frank's love and loyalty to his family, friends, and loved ones was fierce, as was the bright and enduring light he shone upon those who came to know him.

In lieu of flowers, memorial contributions in Frank`s memory may be sent to JDRF Palmetto Chapter:https://www2.jdrf.org/site/Donation2?idb=1837342885&df_id=2374&mfc_pref=T&2374.donation=form1. Expressions of sympathy may be viewed or submitted online at www.mcalister-smith.com. Funeral arrangements have been entrusted to McAlister-Smith Funeral Home in Goose Creek (843) 553-1511.
To order memorial trees or send flowers to the family in memory of Frank Mitchell Arnold, V, please visit our flower store.