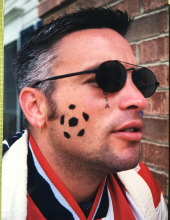 Fred C. Bricka, 51, of Summerville, SC, passed on Saturday, February 25, 2017. He was born in Rota, Spain, to Ric and Carolyn Bricka of Virginia Beach, VA. He is survived by his loving wife Helen and his beautiful stepdaughter Logan; his parents and his brother Ed; his beloved nephew Addison and niece Eden; and his precious fur-babies. His family welcomes all those who would like to attend a Celebration of Fred's Life at the Goose Creek Chapel of McAlister-Smith Funeral Home on Saturday, March 4, 2017, from 4:00 PM to 6:00 PM, with military honors at 6:00 PM. (869 St. James Ave., Goose Creek, SC, 29445) In lieu of flowers, memorial donations may be made to the pet rescue of your choice or towards the unexpected expenses to GoFund Me Page
Expressions of sympathy may be viewed or shared at www.mcalister-smith.com or Fred's Facebook Page

Fred graduated in 1983 from Green Run High School of Virginia Beach, VA. Sandbridge and Virginia Beach had the pleasure of Fred being a Life Guard and OBX had the pleasure of him being an avid surfer. He played water polo for the "U" of Miami where he graduated with a Bachelors of Arts in Marine Science in 1987. His love of the ocean never wavered as he served as Life Guard in South Beach and shared his happy-go-lucky attitude with the Miami crowds. In 1988, Fred's love of his country prompted him to join the US Army where he excelled as a Ranger in the 75th Ranger Regiment, 2nd Battalion Special Operations. Fred served as Field Artillery Captain during his deployment to southwest Asia during Operations Desert Shield/Storm. Fred continued sharing his compassion and influence from 1997 through 2008 at Bank of America where he earned his Six Sigma Black Belt. From 2008 through 2010, Fred's amazing organizational skills kept him occupied as Sr Manager for Price, Waterhouse, Coopers, LLC. Since 2010, Fred has shared his charisma and charm with all those he met. Fred was a loving family man who loved his Little Lo like she was his own. While playing Barbies at tea during his make-over, Fred said, "Ranger School never prepared me for this and I wouldn't trade it for anything!" He loved his friends and was always just a call away. He was devoted to his dogs and Foothills Golden Retriever Rescue (www.fhgrr.com). And most of all, Fred loved his soul-mate Helen. Any one that knew Fred knew they had a friend and brother in him.
To order memorial trees or send flowers to the family in memory of Fredric Charles Bricka, please visit our flower store.