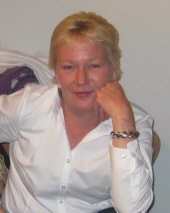 Gail C. Sanderlin, 56, passed away Thursday, September 3, 2015. Gail was born October 24, 1958 in Cleveland Ohio, a daughter of Veronica Zgrabic Fath and the late Thomas E. Fath. Gail attended Nativity Catholic School and graduated from Bishop England High School. She attended Nativity Catholic Church and was a long time resident of James Island. She enjoyed gardening and the out of doors. Survivors include her mother, Veronica Z. Fath of James Island; 2 sons, Steven J. Sanderlin and his wife Kari of Hollywood and Eric Thomas Sanderlin of West Ashley; 1 granddaughter, Anastasia Sanderlin and 1 grandson on the way, Sawyer Sanderlin; 2 brothers, Thomas Fath and his wife Kathryn of Cross, SC, William Fath and his wife Jerry of Bath, NC; one sister, Mary Kinney and her husband William of Charlotte, NC as well as many nieces and nephews. A private celebration of her life will be held. Expressions of sympathy may be viewed or submitted online at www.McAlister-Smith.com. Arrangements were entrusted to McALISTER-SMITH FUNERAL HOME, JAMES ISLAND CHAPEL, 347 Folly Rd., Charleston, SC 29412, 843-614-8494.