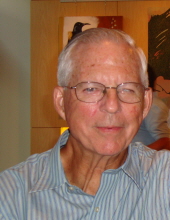 George was born on August 14, 1933, in Norwalk, Connecticut. He grew up with his father and sister, Laura, in Darien, Connecticut as his mother passed away when he was 11 years old. He enlisted in the Army and served in active duty during the Korean war and was decorated for his service. After the war he returned to the United States and served for eight years in the Army Reserves.  He attended Wichita State University on the GI Bill to study criminal justice. After he graduated, he became a case manager at the Chester State Prison. He obtained his Master of Public Administration from New York University. He later joined the Federal Bureau of Prisons working in both Danbury, CT, and in Washington, DC, in prison administration.

He was proudest of his work in championing treatment for drug and alcohol problems while in prison and rehabilitation programs to support return to public life when persons had completed their sentences. George was very proud of his 57-year marriage to Marie Grace Mark Anthony and their three children -- Gigi, Chris and MaryBeth. Since he worked in a prison, he was very focused on securing the house and led roll-call every night which drove his children crazy!  Some of his favorite things to do included going fishing and clamming on his boat. He taught his children how to dig clams out of the muck in Long Island Sound with their feet. It was not uncommon to go into the basement of George’s and Marie’s house and find at least 100 clams sitting on newspaper ready to be cooked or served. The Five-Mile River was near their home and he would take his children to it to feed the ducks and to fish.  He loved Carvel ice cream and would take his children to get soft-serve ice cream cones with sprinkles or a chocolate shell and typically got into trouble with Marie for doing that! He was full of pride watching his children become adults, choose their work and marry great partners (Frank, Jessica, and Mark). He was proud of his children and their partners, and their respective careers.  When he retired in 1996, he and Marie moved to Charleston, South Carolina to begin the next part of their lives. They had always wanted to travel and went to Ireland, Canada, Germany, Italy, Prince Edward Island, St. Maarten, Jamaica, California, and many other places. They enjoyed all of their trips and loved seeing new places. A great source of enjoyment was time with family, especially grandchildren. George is survived by 8 grandchildren (Ariel, Keely, Zoe, Rory, Bailey, Hugh, Nora and Nick) ranging in ages from 14 to 24 years of age. They loved having their grandchildren visit them.  Their Charleston home was on the marsh and near the beach, and the grandchildren were frequent visitors.  Keely and Rory grew up in Charleston and as children were with their “Papa” regularly. George passed away peacefully on Saturday, March 7, 2020. He will be missed greatly by his family and especially by his wife Marie.

There will be a private memorial service.

Funeral arrangements have been entrusted to McALISTER-SMITH FUNERAL & CREMATION, James Island, 347 Folly Rd., Charleston, SC 29412, (843) 614-8494.
To order memorial trees or send flowers to the family in memory of George B. Smith, please visit our flower store.