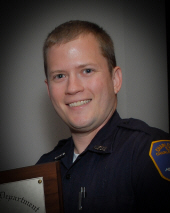 Sgt. George Conrad Hildebidle, 33, husband of Elizabeth Waymire Hildebidle, of Charleston, passed away Thursday, April 9, 2015. George was born on September 23, 1981 in Charleston to Nancy Harnsberger Hildebidle and the late Ralph George Hildebidle. George was a graduate of the University of South Carolina and served as a policeman for 12 years with the City of Charleston. His accomplishments include; field training officer, basic instructor, speed measurement device instructor, standardized field sobriety test instructor, DUI enforcement officer, block training instructor, civil disturbance unit supervisor, and patrol sergeant for over 3 years. The Charleston Police Department recognized Hildebidle as police officer of the quarter in May 2008. The SC Department of Safety recognized him for having more than fifty DUI arrests in May 2010. His family remembers him as a loving son, devoted husband and father and a dear friend to many. Besides his father, George was preceded in death by his maternal grandparents, Robert and Martha Lou Harnsberger, of Luray, VA. Survivors include his wife Elizabeth Waymire Hildebidle of Charleston; one son, Matthew Conrad Hildebidle; his mother, Nancy H. Hildebidle of Charleston; his brother-in-law, Nicholas Waymire and his wife Brooke of Virginia; his father-in-law, Lee Waymire and his wife Kelly of Virginia; his mother-in-law, Deborah Waymire of Charleston. A memorial service will be held on Monday, April 13, 2015 at 2:00 pm at Seacoast Church of West Ashley, 2049 Savannah Hwy, Charleston, SC 29407. Pastor Chuck Sumner will be officiating. In lieu of flowers, Memorial donations may be made in his honor to www.gofundme.com/hildebidle. Condolences may be viewed or submitted online at www.mcalister-smith.com Arrangements have been entrusted to McALISTER-SMITH FUNERAL HOME, WEST ASHLEY CHAPEL, 2501 Bees Ferry Road, Charleston, SC 29414, Phone: 843-722-8371.
To order memorial trees or send flowers to the family in memory of George Conrad Hildebidle, please visit our flower store.