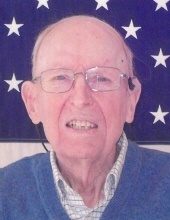 Glenn Charles Reinhold, 87, passed away peacefully on Friday, 12 October 2018 in the presence of his daughter, Stephanie Hearn and his son-in-law, Jeffrey Hearn at the Veterans' Victory House in Walterboro, SC.

Glenn was born on 17 December 1930 in Duluth, Minnesota. He was a widower of Anne Marie Reinhold and the son of Henry and Agda Reinhold.

After serving in the Army, Glenn attended and graduated from the University of Minnesota and later received his MBA from The University of Virginia. He moved his family to Atlanta, GA where he worked as a business consultant. He was an active member of St. Martins in the Field Episcopal Church. He enjoyed playing golf and was an avid Minnesota Vikings fan.

Glenn will be cremated at McAlister-Smith Funeral Home in West Ashley and inurnment will be held at the Columbarium at St. Martins in the Field Episcopal Church in Atlanta, GA on 26 October 2018. There will be a small ceremony at the Columbarium with the immediate family.