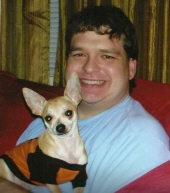 Glenn C. Goodwin, Jr., 39, of North Charleston, passed away January 4, 2013. Born at Travis Air Force Base, CA, he was the son of Glenn C. Goodwin and the late Duckye Brown Goodwin. Glenn graduated from the College and Charleston and pursued his love of art through his business, Fantasy Wall Gallery. He also enjoyed Civil War genealogy and re-enactment (the 54th and 27th regiments) and painting miniatures for gaming. Glenn was a member of the Historical Miniature Gaming Society. He is survived by his father, Glenn C. Goodwin, Sr. of North Charleston and many extended family member and friends. A Celebration of Life will be held Friday, January 24, 2014 from 5:00 until 7:00 p.m. at MCALISTER-SMITH FUNERAL HOME, GOOSE CREEK CHAPEL.