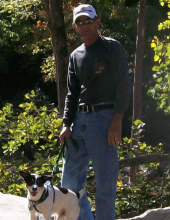 Born on September 28, 1947, in Charleston, South Carolina, Harry was a son of the late Harry M. Hutson Jr. and Lena Pearl Hutson.

Harry, a general contractor/handyman, was beloved by his many customers. He also worked many years at the Charleston Naval Shipyard as a Nuclear Boilermaker. He spent much of his time on his Harley-Davidson Fatboy, riding with friends. He loved hunting and fishing on the Edisto River. He was a dedicated husband, father, granddad, brother, uncle, cousin, and friend.

Besides his wife, he is survived by his daughter Sandra Marlowe (Anthony) of Myrtle Beach, SC; his son Harry M. Hutson, IV of Goose Creek, SC; a sister Harriett Cumbee (Harold); 4 grandchildren; Austin, Caroline and Allison Lewis and Wyatt Hutson. He was preceded in death by his brothers, Charles Kitchens and John M. Hutson.

The service will be held at McAlister-Smith Funeral & Cremation Goose Creek, on Saturday, July 24, 2021, at 3:00 p.m. His ashes are to be spread on the Edisto River at a date and time to be established later.