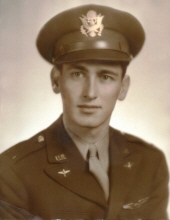 Harry P. Morrow, 94, of Mount Pleasant, SC died on December 24, 2014. Mr. Morrow was born March 4, 1920 in Charlotte, NC to the late Allison Nesbitt Morrow and the late Harry Morrow. After finishing high school, Mr. Morrow graduated from the University of Georgia and was an avid Bulldogs fan for 76 years. He put his pharmacist career on hold while he proudly served his country in the United States Army Air Corps as a fighter pilot in WWII and in the USAF (ANG) during Vietnam. He retired in 1970 from the Georgia Air National Guard, 165th Airlift Wing, as a Command Pilot with over 6100+ hours of military flying after 28 years of service. He and his wife lived in Columbia, SC for over 50 years where they were members of Eastminster Presbyterian Church before moving to Mount Pleasant five years ago. After retirement, Mr. Morrow enjoyed â€œchasing the ballâ€ around the golf course and never let a day go by without watching his Fox News. He was devoted to his family and loved every moment spent with them. Mr. Morrow is survived by his loving wife of 71 years, Gwendolyn Louise Morrow, of Mount Pleasant, SC, one daughter; Pamela Morrow (Pat) Stogner, Kennesaw, GA, one son; Henry Calvin (Julie) Morrow, Mount Pleasant, SC, four grandchildren; Amy (Jim) Warner, Rebecca (Jeff) Herold, Matthew Morrow, and Luke Morrow, three great grandchildren; Mary Chappel Warner, Amelia Warner, and Jay Herold, and many loving nieces, nephews, and family friends. A Memorial Service will be held at the Beaufort National Cemetery on Friday, January 9, 2015 at 2:00 p.m. with Reverend Phillip Lee officiating. In lieu of flowers Memorial donations may be made in his honor to the Wounded Warrior Project, https://support.woundedwarriorproject.org Expressions of sympathy may be viewed or submitted online at www.McAlister-Smith.com.