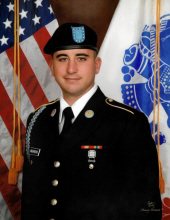 James Anthony Rigoroso, 22, of Charleston, passed away on Sunday, April 29, 2018.
James was born on May 15, 1995 in Prince William County, Virginia to Sal Rigoroso and Kristen Buongiovanni-Gatgounis. He was the identical twin to Joseph Rigoroso, who preceded him in death on May 25, 2017.
He is survived by his parents, Kristen Buongiovanni-Gatgounis and John Gatgounis of Folly Beach and Salvatore Rigoroso and Damairys Rigoroso of Summerville; sisters, Nicole Rigoroso and Lauren Rigoroso and step-siblings, Yaser Perez and Katrina Mirabent. James is also survived by many extended family members and friends.
The family will receive friends from 2-3pm on Friday, May 4, 2018 at McAlister-Smith Funeral Home, James Island Chapel.
A Celebration of Life service will be held at 3pm, after the visitation. Burial will follow the service at Magnolia Cemetery, 70 Cunnington Ave, North Charleston, SC 29405.
Condolences may be viewed or submitted online at www.mcalister-smith.com
Arrangements entrusted to McALISTER-SMITH FUNERAL HOME, JAMES ISLAND CHAPEL, 347 Folly Road, Charleston, SC 29412, Phone: 843-614-8494.
To order memorial trees or send flowers to the family in memory of James Anthony Rigoroso, please visit our flower store.