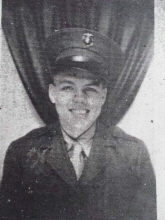 James Boyd Johnson, Jr., 89, of Goose Creek, SC, passed away on Tuesday, January 13, 2015. He was born on Wednesday, January 28, 1925, in Lillington, NC, to the late Mattie Bryant Johnson and the late James B. Johnson, Sr. He was raised by his mother and step-father, Ralph Nell Barnes in North Carolina. Jim attended the College of William and Mary, and retired from Swift Meat Packing Company, where he worked for over 40 years. After retiring, he owned and operated â€œMr. Jâ€™s Olde Timey Meat Marketâ€ in North Charleston. He proudly served his country as a US Navy Corpsman, embedded with the US Marines during WWII, where he received a bronze star. Jim loved spending time with his family, reading his bible and many novels, and was an avid gardener. Along with his parents, Jim is preceded in death by his youngest brother, Samuel Thea Johnson of Goldsboro, NC. He is survived by his loving wife of nearly 66 years, Elizabeth Lane Johnson of Goose Creek, SC; three daughters: Cheryl Carawan (Tom) of Sterling, VA; Cindy Johnson of Virginia Beach, VA; and Christi Lane Van Slooten (Chad) of Ravenel, SC; two sons: James B. Johnson, III (Beth) of Ridgeville, SC; and Craig Johnson of Summerville, SC; one brother, Robert L. Johnson, of NC; 11 grandchildren; and 4 great-grandchildren. A memorial service will be held at 11:00am, on Saturday, January 17, 2015, at McAlister-Smith Funeral Home West Ashley Chapel, with Reverend Marshall Blalock officiating. Expressions of sympathy may be viewed or submitted online at www.mcalister-smith.com. Arrangements have been entrusted to McALISTER-SMITH FUNERAL HOME WEST ASHLEY CHAPEL, 2501 Bees Ferry Road, Charleston, SC 29414, 843-722-8371.