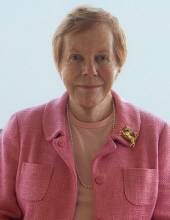 Jane Maas, widely hailed as a “legend” and named by Advertising Age as one of the most influential ad women of the last hundred years, died peacefully on Friday, November 16th, 2018 in Mount Pleasant, SC.

One of the original “Mad Women of Madison Avenue,” she is best known for heading the “I Love New York” campaign, which revitalized tourism. “This great advertising has many fathers,” she said. “But I am its only mother.” She began her advertising career at Ogilvy & Mather in 1964, rising from junior copywriter to become a creative director and the second woman at that agency to be made a vice president. She worked on global brands including Maxwell House coffee, Dove soap, Johnson Wax and Drano.

Wells Rich Greene hired Mrs. Maas as a senior vice president and creative director to work on the Procter & Gamble business. Soon she was assigned to what began as a tiny account to advertise the ski areas of New York State, and blossomed into “I Love New York.” The famous ILNY logo, designed by Milton Glaser, is seen on T-shirts and coffee mugs all over the world.

Jane Maas was born in Jersey City, NJ in 1932, the child of Charles and Margaret Brown. She attended Bucknell University, where her parents had met, was elected to Phi Beta Kappa in her junior year and graduated summa cum laude. She won a Fulbright Scholarship and spent the year 1953-54 at the University of Dijon, France. The following year she received an M.A. in English Literature from Cornell. In 1957, she married architect Michael Maas. “They were the poster children for a fabulous marriage,” one colleague stated. “Two extremely successful people, who always made each other a top priority.” Michael Maas died in 2002.

Mrs. Maas has written three well-known advertising books. She was co-author, with former Chairman/CEO of Ogilvy & Mather Worldwide Ken Roman of the classic How to Advertise, which has been translated into 17 languages. Mad Women, published in 2012, is the no-holds-barred story of what it was like to be a woman in advertising in the 1960s and 1970s, the sexy and sexist era of the television series Mad Men. Advertising Age called her “the real Peggy Olsen, right out of Mad Men.” She also wrote a light-hearted memoir, Adventures of an Advertising Woman. Mrs. Maas is the author of two Christmas books: Christmas in Wales: A Homecoming ( written with her husband) and The Christmas Angel which was made into a Hallmark Channel movie.

Jane Maas was involved in education and the arts throughout her life. She was a member of the Board of Trustees of Bucknell and Fordham Universities, and the Advisory Council of the William E. Simon Graduate School of Business at the University of Rochester. She served as Public Director of the American Institute of Architects, and a member of the Board of the American Architectural Foundation. She was awarded honorary degrees by St. John’s University and Ramapo College.


Mrs. Maas moved to Charleston in 2015 to be close to her daughters and granddaughter Jenna.

Her passion for women’s education, was ignited at Ashley Hall where her Granddaughter, Jenna Maas ’18, attended. In 2016, speaking at Assembly, she "wowed" the students with personal stories of the "Mad Men" advertising world of the 1960's, and inspired the girls - “there's still more work to be done" for females in today's corporate world.

She cherished her new community at The Palms of Mt. Pleasant and was thrilled to befriend residents, management and employees. She served as Secretary on the Resident Council. Jane’s meeting Minutes were always done with flair and originality. She became an unofficial Social Director creating Sunday morning trivia games, and used her writing talents for witty contributions to the Newsletter.

In addition to her professional accomplishments, Mrs. Maas was kind, caring, and generous to everyone who met her. She is survived by two daughters, Kate Maas of Daniel Island and Jennifer Maas Jones of James Island, a sister, Susan Weston of Philadelphia, and a granddaughter, Jenna Maas, a college freshman.

A Memorial Mass will be held Monday, November 26th at 11:00 am at Christ Our King Church in Mt. Pleasant. A celebration of her life in New York City will be announced.

In lieu of flowers, charitable contributions to the Jane Brown Maas Scholarship at Bucknell University would be appreciated. Gifts in Jane's memory can be made online -- https://give.bucknell.edu or sent by check to Bucknell University 301 Market Street, Suite #2 Lewisburg, PA 17837 attention Gift Processing.