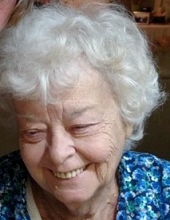 She was born on Thanksgiving Day November 23rd, 1939. Jeanne was the daughter of James Earl McClary and Margaret Erline McClary formerly of Charleston, South Carolina.

Jeanne and Julius met during the summer of their 8th and 9th grade years in Charleston, SC.
They were introduced by their grandmothers. Jeanne and Julius, or “Noodle” as she affectionately referred to him, dated throughout high school and were married in 1958. Shortly thereafter, Julius was hired on as a Brakeman for Southern Railway and their lives began together.

Jeanne was a loving, selfless mother and homemaker who always put the needs and well-being of others ahead of her own. She was a remarkable cook and enjoyed preparing meals for her family. Jeanne was fond of animals; especially her dogs and the many birds that would flock to her home to feast on a variety of treats.

Jeanne was fortunate to call many places “home”. Originally from Charleston, SC she also referred to Rock Hill, SC and Asheville NC as her “homes”. Her love of the mountains of Western North Carolina always held a special place in her heart.

The family will receive friends on Sunday, July 14th from 5:00 pm to 6:00 pm at McAlister-Smith Funeral Home, West of the Ashley, in Charleston, SC.

A graveside service will be held at Bethany Cemetery in Charleston, South Carolina on Monday, July 15th at 10:00 am.