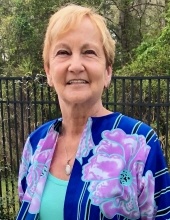 A child of the universe, Jill took delight in living life to the fullest, accompanied by her four companions: Minnie, Molly, Mickey and Moe who faithfully lay with her till the end. Her love of dogs began in childhood, with Lady and Princess, and she was never without a dog at her side for long. Exploring roads that eventually led out of the Alberta Prairies where her parents, Harry and Amy Joyce built their new home after they emigrated, arriving from England. She was born in the Miseracordia Hospital and attended school in Devon. At the age of 18, Jill married, and moved to Connecticut where her career in food management began to blossom. She also took on the responsibilities of being a military wife, counselling many young women who were facing their own difficulties of being alone, and away from their own families.

After the birth of her son and daughter her parents joined her in Connecticut and helped with child rearing. Jill took on management of The Officers Mess in Groton Connecticut. She also cared for Harry and Amy when their own journeys came to an end.

When Myles, Jill and Shannon moved to the Charleston area, they shared many adventures over the years. In time, Jill and Pete found kindred stories in each other’s lives and decided to marry. And while his career required him to often be out of the country, his voice was always nearby, giving her all the love and support he could, recently leaving Japan to become her constant companion during the last months of her life.

Her family will miss Jill’s generous and loving nature and her ability to find humour even in the worst of situations. The family sends so much gratitude to her devoted friends who have always had her back and have come to her aid in so many open-handed ways. And much appreciation to the diligent home care staff, nurses and doctors that have cared for her through her illness and her long passage from this life. Thank you, thank you thank you.

In lieu of flowers, memorial donations may be made to the American Cancer Society.

Expressions of sympathy may be viewed or submitted online at www.mcalister-smith.com. Arrangements have been entrusted to McAlister-Smith Funeral Home, 869 St. James Avenue, Goose Creek, SC 29445.
To order memorial trees or send flowers to the family in memory of Jillian Dennise Joyce-Curry, please visit our flower store.