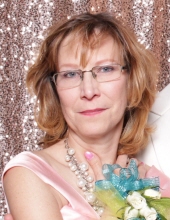 "Life is a journey to be experienced, not a problem to be solved." -Winnie the Pooh

Johanna "Allston" Schwartz, wife of Frank Schwartz, mother to Griffin and Mitchell Schwartz, daughter of Johanna Allston (Ted Swinnerton) and the late Frank Griffin, Jr. (Patty Griffin) was laid to her eternal rest October 31, 2020. Words are inadequate when describing Allston's tenacity and will to live a life filled with positivity, warmth, and love.

Allston was talented in many areas and pursued many passions during her lifetime. She worked as a middle school drama and theatre teacher and performed in local theatre groups. Allston was endlessly creative and lived life to the fullest every day. She actively participated and supported all of Griffin and Mitchell's activities including scouting, soccer, football, and school. Allston was quick to jump in whenever and wherever needed. Allston served as the treasurer of Beta Sigma Phi Sorority, Chapter Epsilon Rho.

One could not wish for a truer friend than Allston. She was loyal, engaged, and never wanted anyone to feel excluded. Allston is survived by her mother, Johanna, husband of 21 years, Frank Schwartz, and twin sons Griffin and Mitchell Schwartz.

In lieu of flowers, the family asks that donations be named in Allston's memory to St. Jude's Children's Hospital. Family and friends will be notified of funeral arrangements shortly.