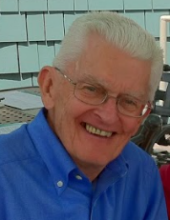 John A. Merritt, Jr., M.D., 87, of Mount Pleasant, South Carolina (formally of Guilford, Connecticut), passed away peacefully surrounded by his family at his home on November 17, 2018.
John was preceded in death by his beloved wife Marilyn (Wilson) Merritt and his and grandson Joseph Merritt.
He is survived by his children, Mary Beth, of Lebanon, New Hampshire; Gail and John, of Mount Pleasant, South Carolina; Nancy, of Huger, South Carolina; and his sister Jill Mayer of Mesa Arizona.
Son of Emma Dietrich and John Merritt Sr. He was born and raised in Greenwich, Connecticut.
John was a graduate of Greenwich High School in Greenwich, Connecticut. He went on to receive an undergraduate degree from Dartmouth College and medical degree from Yale University School of Medicine. He earned American Board Certifications in Geriatric Medicine, Hematology, and Internal Medicine, as well as a fellowship in the American College of Physicians. He was appointed to Assistant Professor of Medicine at Yale University, University of Massachusetts and Tufts University Schools of Medicine.
John served as a Captain in the Air Force School of Aerospace Medicine in San Antonio, Texas.
He was Chief of Medicine at Worchester City Hospital in Worchester, Massachusetts and Hospital of Saint Raphael in New Haven, Connecticut.
As the Hospital of Saint Raphael’s first Chief of Geriatric Medicine, a position he held from 1989 to 2004, Dr. Merritt was ahead of his time in creating a department that served the New Haven area with innovated programs such as Project Eldercare, which reached out and embedded themselves in the community. As one of the early physicians to be trained in the field of geriatrics, Dr. Merritt taught Worchester and New Haven health professionals and students this new specialty and enriched the care of thousands of patients. After retiring as chairman, The Hospital of Saint Raphael honored him with a lectureship in his name. His leadership and mentorship in the New Haven Community is fondly appreciated by all whose lives he touched.
John was a member of Saint George Catholic Church in Guilford, Connecticut and Saint Benedicts Catholic Church in Mount Pleasant, South Carolina where he enjoyed singing in the choir. He was an avid gardener, golfer and enjoyed fishing with his son John. He also had love of good food and wine and traveling the world.

The family will receive friends on Monday November 26th from 5:00 to 8:00 PM at The Guilford Funeral Home.

A Mass of Christian burial will be held at Saint George Catholic Church, Guilford Connecticut on Tuesday November 27th at 10:00 AM.