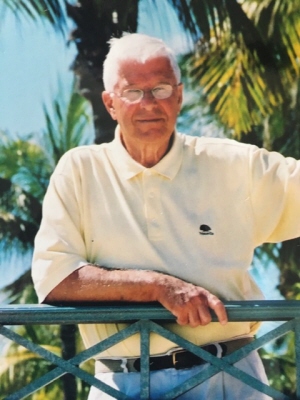 John was a devoted husband and was preceded in death by his wife Arline Stonitsch. He was the loving father to Christine (Robert) Atkinson and John (Amy) Stonitsch Jr. John was the proud grandfather to Robert H Atkinson III, Hope (JT) Walters and Samuel Atkinson. He was the great grandfather to Austen Walters and her soon to be born sister. John was the son of the late John and Marie Stonitsch of Hempstead, NY, and brother to Janet Merk.

John was born in Floral Park, NY on January 14, 1934. He graduated from Roosevelt H.S where he set several records for track and field. John was also a star athlete for The Hustlers, a local athletic club. He served in the U.S. Army from 1954-1956 and took advantage of this time to see Europe. John and Arline were married in 1960. John owned and operated Pullman Electric Company, an Industrial Electric contracting company and was a member of the electrician's union on Long Island, IBEW local 25. He retired to Juno Beach, Florida where he became an active member with his local church, St Paul of the Cross. John enjoyed playing golf and was always ready to show you his swing. John enjoyed a regularly active social life wherever he was. He had many friends and family with whom he remained in constant contact.

John will be remembered by his family and friends as a man of very strong faith, who was devoted to all members of his family and very dear to all his many friends.

Due to current circumstances, no viewing will be held. The funeral will be private to keep everyone safe.

In lieu of flowers, the family requests that donations be made in John's memory to St Paul of the Cross Parish, 10970 Jack Nicklaus Drive, North Palm Beach, Florida 33408 or National Right to Life

Arrangements are being handled by McAlister-Smith Funeral Home, James Island.
To order memorial trees or send flowers to the family in memory of John J. Stonitsch, Sr., please visit our flower store.