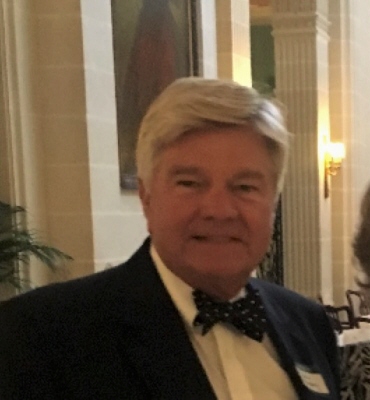 John Joseph Murphy, III, 77, of Charleston, SC and formerly of Georgetown, SC passed away peacefully surrounded by family on March 5, 2021. John was born February 24, 1944 in New York, New York, son of the late John J Murphy Jr and Willie Mae Owen Murphy. John was raised in Columbia, SC and graduated from AC Flora High School in 1962. He then received a BBA from the University of Georgia in 1967. After serving in the United States Army at Ft Jackson, SC and later at Kapaun Barracks in Kaiserslautern, Germany, John earned an MBA from the University of Utah. John is also a graduate of the Harvard Business School Executive Program.

John spent the majority of his career with Sonoco Products Company of Hartsville, SC. After serving in several staff positions, he was promoted to President of Sonoco Canada in Brantford, Ontario. Later, John served as Chief Operating Officer of both Sonoco Europe in Brussels, Belgium and Sonoco United Kingdom in Manchester, England. After returning to the U.S., John became CEO of Ryne Mills in Lincolnton, NC and completed his career with Greenwood Mills in Greenwood, SC as President and COO.

After spending his career traveling the world, John knew he wanted to spend his golden years in his favorite place and retired to Debordieu, SC. He was a member of Georgetown Presbyterian Church and in the past two years attended The Chapel at Biship Gadsden. He remained very active in retirement, earning a real estate brokerage license and Commercial Captains license while continuing to work full time in various HOA roles with Park West and Waccamaw Management. John's love of the water led him to serve in the US Coast Guard Auxiliary where he recently retired as Division Commander. In his spare time, John enjoyed playing golf, spending time with his grandchildren and captaining afternoon cruises aboard the Carolina Rover.

A celebration of life will be held at Indiantown Presbyterian Church on Saturday, March 20, 2021 at 2:00 PM. Visitation will be held afterwards at the Fellowship Hall. In lieu of flowers, the family has requested that memorials be designated to the John J Murphy III and Sara Murphy Family Legacy Fund for Thornwell Home for Children at 302 South Broad Street, Clinton, SC 29325-9972 or a charity of your choice.
To order memorial trees or send flowers to the family in memory of John Joseph Murphy, please visit our flower store.